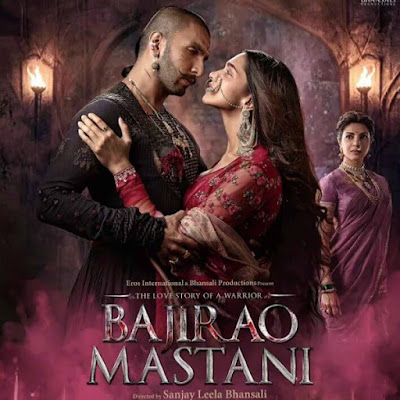 I don’t really review movies on this blog but I decide to give a chance to this one for a reason. Read on …

Not considering Bahubali as a Bollywood product, this one comes out as a fine Epic / Period film from Bollywood after a long time.

Story-line, its a love story, aggressively nuanced, laced with emotions & high drama, beautifully wrapped around the complexities of family relationships, society and above all, religion. Not an easy subject to deal with, respecting the sensibilities of family, social norms, religious beliefs and values.

Well, what I particularly liked about the story-line is a very strong sense of morality & commitment shown in the character of Bajirao (played by Ranveer Singh) - Yes, even if it is a triangular love story where happily married Bajirao falls in love with another girl - Mastani (played by Dipika Padukone). There is absolutely no sense of “cheating” in the character of Bajirao.

When Bollywood dishes out substandard stories showcasing “messed-up” relationships, film after film, built on lowest levels of trust & morals, devoid of content and only Masala, this one comes out to be a breeze of fresh air.

One single dialogue captures the essence:


Just to clear the point here, I am not justifying the extra-marital relationship of Bajirao - not even remotely. I am only dealing with the subject of how he handles and treats the issue, with simply being honest & truthful about it. That, is a big take away from the strong character of Bajirao.

Men who cheat with complete disregard to the womanhood, running around like rabbits and messing up relationships, Bajirao shows them the character of a Man:

One, he never initiated this extra-marital relationship, even though as a warrior, he might have been impressed with Mastani's extra-ordinary courage, patriotism and fighting skills.

Two, he makes abundantly clear to Mastani the future of their relationship and that he can never provide her the place of his Wife, well before he commits himself into it.

Three, he is totally open and honest about it, that includes his wife Kashibai (played by Priyanka Chopra), Mother, Society, Religious heads of his estate etc.

Next up, when the lines between Utsav and Mehfil have blurred in the society, it was nice to see Bajirao stand up and not let Mastani dance for the entertainment of men-folk at the Mehfil, while everyone had enjoyed her dance performance the other day on another occasion. Upon being questioned, he clarifies: "वो उत्सव था , ये महफ़िल है"; meaning that was a festive joyous celebration (Utsav) while this an entertainment of the gathered men-folk (Mehfil).

Clearly defining the difference between the two - Utsav & Mehfil, was another strong yet symbolic message.

***
I am not a qualified & experienced film critic so it would not be fair on my part to comment on the technical aspects of film-making of Bajirao Mastani, but I guess a good director is recognized when he gets the actor into the role & character. Just about all the actors have done very well in this department.
One person who needs special mention here, who has actually evolved as an actor and "Arrived" is Ranveer Singh - his Maratha style dialogue delivery - very nuanced, not over done at all, perfect diction, eye movements, facial expressions - he lives like a real Bajirao all through the movie. 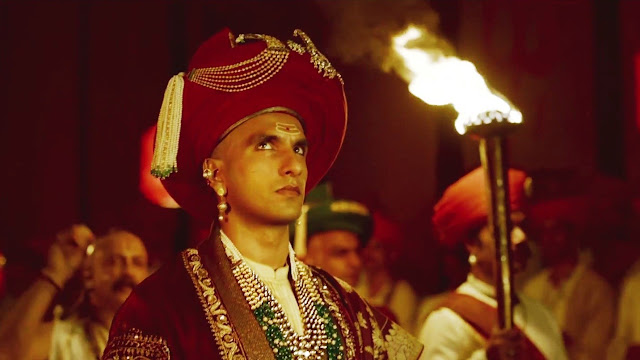 Ranveer, the Boy turns into a Man in Bajirao Mastani.


***
Apart from the basic plot, story-line and a line up of celebrity star-cast, Music literally defines the Bollywood movie. Music of Bajirao Mastani does an excellent justice to it. Maratha folk and real Indian instruments such as Dholak, Shehnai, Ghungroo, Tabla, Dhols, Harmonium, Santoor etc. build the foundation of almost all the numbers. It was nice to hear real instruments and not just artificial sounds from synthesizers and mixers.
First thing that hits you is a very strong orchestral Indian music, without playing around with the synthetic digital mixing, quite unlike the norm these days.
Secondly, it's not typical Bollywood "dhin-chak". Maratha folk based semi-classical compositions with Qawwali interludes at times, help build the aura around the grandeur and spirit of the period and geography of the story-line. Job very well done indeed!

My favorites are: Malhari (for the sheer raw energy and pace of this high-octane victory number - Ranveer does a fabulous job) & Mohe Rang Do Lal.

I leave you with this Malhari song - Enjoy!