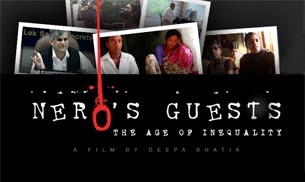 The reason why I have taken up to write a review of Nero’s Guests is because it needs to be widely circulated, written and talked about, as much as possible; so that everyone gets to see it, those who still do not get the time to watch it, may further need to be motivated to do so, and only then it will reach out to the wider audience and be able to make a real impact.
The mainstream media today is totally degenerated and corrupted as it does not cover anything that is not “breaking news” or that is not considered “glamorous” enough to catch eye balls. For this obvious reason, Nero’s Guests has been completely ignored by the mainstream media (both print & electronic) and is not given its due space & visibility.
The subject itself is not new to any of us and it has become a part of our daily lives - mere statistics. It is about the severe agrarian crisis that the country is faced with, as a result of which farmers are still committing suicide and as many as 200,000 farmers have already paid a price by giving away their lives, over the last decade or so. It has been written, talked and debated about in certain sections of the press; but the film is extremely thought provoking, highly emotive, heart rending and at times is absolutely shocking and painful.
The angst and frustration of journalist P. Sainath, Rural Affairs Editor of The Hindu (Protagonist and the man behind the film), is highly contagious. His aggressive and emotionally charged narration (supported with well researched facts and data) has been able to drive home the message loud and clear. It not only brings out the absolute failure in handling of the crisis by the respective Center and State Governments (both BJP & Congress) but also their complete apathy & inaction towards the crisis, government after government.
Directed by Deepa Bhatia, a noted Bollywood film editor with heavy commercial titles such as Taare Zameen Par and My name is Khan to her credit, this one comes out as a brilliant body of work in the script, the fluid edits without any frills and fills.
Sainath’s talking straight into the camera between the shots, apparently without any pre-rehearsed lines and caution, immediately connects with the audience through interactive viewing and a strong storyline.
Though would love to but rather not talk about the title of the film that finds its origin in Roman History and Tacitus – I would leave it to Sainath himself for he alone would be able to do full justice explaining the background and the relevance of the title to the subject.
The film is a documentary on ground report, narration of facts and situation in the rural India. It does not talk about any solutions or remedy. Sainath believes there could be more than one way to solve the agrarian crisis but it is the apathy and inaction towards farmers committing suicide that actually brings him to this business.
Finally, it was this below  line in Credits that drew my attention:
This documentary has been realised with the support of
The Jan Vrijman Fund
Ministry for Foreign Affairs of Finland

Conclusion:
Sorry, but Socialism and Socialist Policies can just do this much. A step ahead, Socialist Liberalism is nothing but Crony Capitalism. It can only make the rich even richer and the poor even poorer, thereby increasing the divide, the poverty and the disparity among its citizens. And if this is topped with the corrupt and inefficient governance, we can only thank God for not taking us through a civil war already.  There will be many more Nero’s Guests and life will go on.
If this has to change for good, we need to look for serious alternatives – alternatives to change the complete system of governance – to throw away Socialist Policies and embrace Freedom and Liberty.
First of all, the educated common man has to come out of this “I don’t care” attitude, tagged as  “Apolitical” and start seriously thinking about connecting with Politics and Governance, as a responsible citizen. This does not necessarily mean everyone needs to jump into active politics, but everyone must be politically aware and actively support a political movement or initiative that could bring about a change to the degenerating Indian Polity which also matches to their personal ideology. There are plenty of such new initiatives trying to make a difference in this space and one has to just look around, identify and connect with.
One such serious movement catching up momentum, the one and only propagating concept of Freedom and Liberty is Freedom Team of India (FTI). Please join FTI as a Freedom Team Member  or just become a Freedom Partner to connect with and support FTI on various social networking platforms. There is a lot happening around here and one just needs to “get involved” to feel the excitement.
This, in my honest opinion, is the only way to refuse to be among the Nero’s Guests list.