RIP Cricket - it is Tricket now! 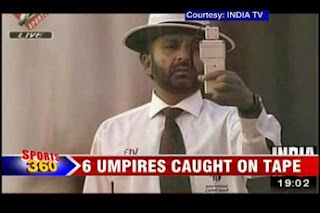 Question: Do we really need sting operations, blaring over TV channels and the screaming headlines flashed over front pages next morning, to prove the obvious?

What once was a fine game called Cricket has since degenerated into what I call as “Tricket” - A reality show, a Tamasha – sheer waste of precious time. Since last few years, probably after the first season of IPL, I have stopped watching this show, just like every other reality show.

But there are millions of innocent cricket-loving-fans across India, who follow the game with their heart and soul. Pouring out their deepest emotions, they discuss and debate the fine details and nuances of every single game; whichever the format, doesn't really matter - Test, 1-Day, T-20. These discussions extend over long hours, before and after every match, at dinner-table, coffee-breaks, bars and restaurants and more lately, over social networking sites. Blissfully unaware and ignorant of the politics and commerce that would have already decided the course of the match, the series and the awards – until such sting operations are flashed out.

With due respect to millions of cricket-fans, we are all being taken for a jolly good ride in this make-believe age of reality show called Tricket. Everything that revolves around the core (The Match) - the controversies, the gossips, the parties, the cheerleaders, the press-meets, including the sting and expose; are all clearly manufactured and choreographed by professional event managers; to make a grand spectacle out of the fine game that once was Cricket, into a Reality Show that I now call Tricket.

But looking back last 2 years or so, there have been very serious corruption and match-fixing charges involving international players and now with this latest one, even the elite panel umpires - I wonder what else is left of Cricket. During this rather quick transition from Cricket to Tricket, one thing that has suffered the most is the spirit and the purity of game. Hence, I replaced the C of Cricket by T, for Tamasha.

Sad that Cricket is long gone. And Tricket is left with one fan less, for sure.