"Uniformity is NOT the idea of India"  ~ Shri S. Gurumurthy This is the review of the above event from a personal perspective, covering trivia, exchange of ideas and 'politically sensitive' highlights that Times of India would never write about.

Shri S. Gurumurthy, as Moderator of the event opened the debate to the panelists with a brief introduction, and how! In his opening address, Shri Gurumurthy argued that 'Uniform Civil Code' should actually be renamed as 'Common Civil Code'. He said "Uniformity is NOT the idea of India".

UCC is one of the most misunderstood concepts in contemporary India and hence a matter of high-octane debates, mostly between the Secular Thekedaars and the 'Communal' Hindutva-wadi. This was probably the first time ever that someone tried to present UCC in such clear terms, replacing simple word 'Uniform' with 'Common', and the whole perception & understanding of the Civil Code is put back into the right perspective.

UCC, or CCC (Common Civil Code) as Shri Gurumurthy likes to call it, is the concept of a Nation State. Mr. Gurumurthy reminded that until 1937, there was indeed a common civil law and only after the intervention of Muslim League, in 1937 the Britishers changed the Law and agreed to recognise Sharia:
"Before 1937, Hindus and Muslims were united by a common customary law. They were divided only by the Shariat Law of 1937." 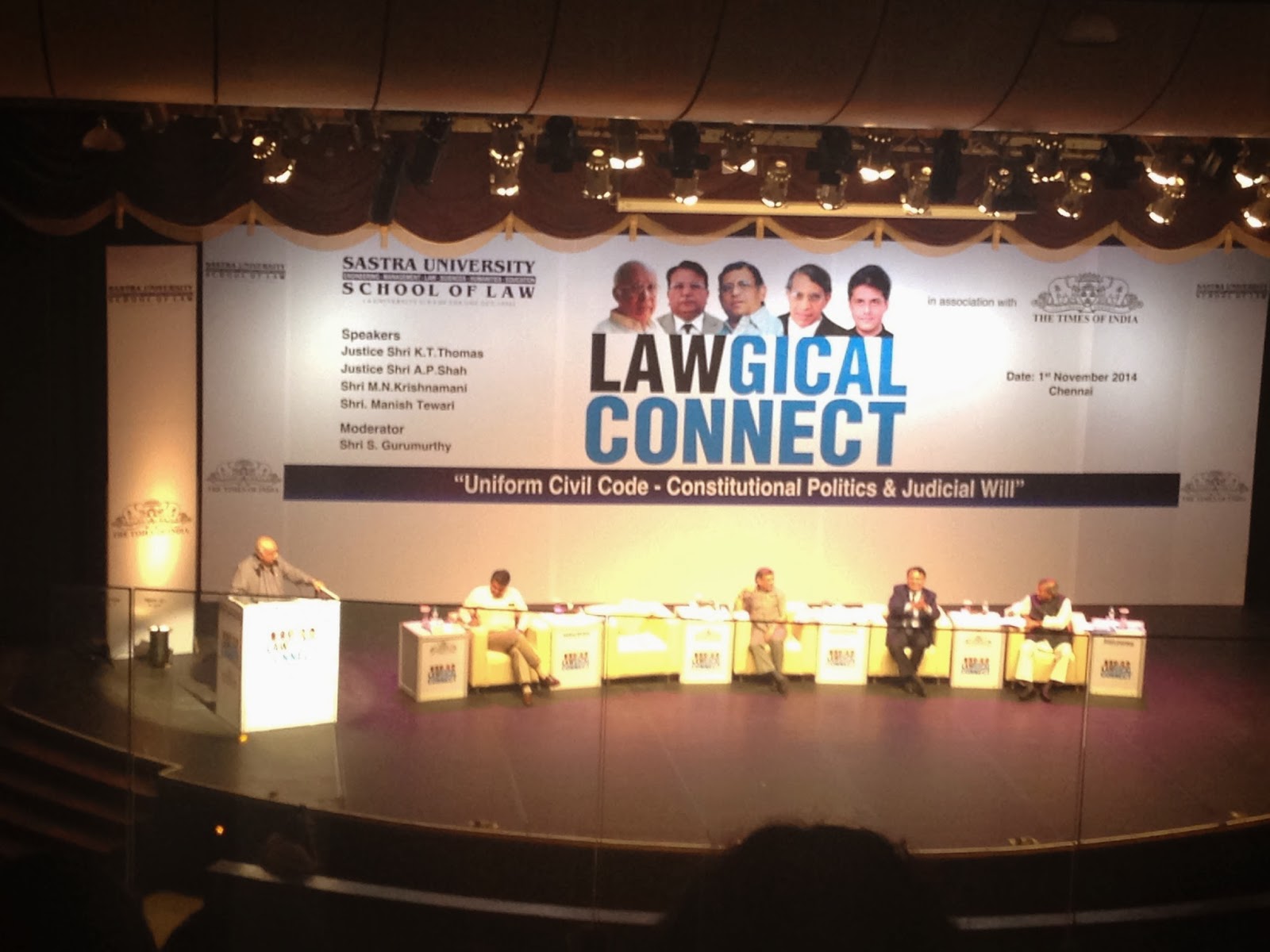 Justice K T Thomas was invited to speak first on the subject. He started off with a little bit of background into the history of independent India and explaining how 554 different states had eventually come together to be called as one Republic. Republic is a country governed by Law.
Constitution is supreme and as per the constitution "All are equal before law". Under Art. 37, it is the duty of State to apply principles in formation of laws. Justice Thomas argued that "Law of Succession" and "Law of Marriage" is not covered by any law. This absolutely warrants UCC. Finally, he concluded stating it was rather unfortunate that even after 65 years we are still debating & discussing the very concept of UCC, a constitutional direction under Art. 44, and signed off by quoting Thomas Jefferson: "Where there is no law, there is anarchy".


Next was Justice AP Shah, Chairman Law Commission of India. Justice Shah spoke at length and argued in detail quoting specific examples arguing that no personal law (Hindu/Muslim/Christian) is 'completely flawed' or 'completely perfect'. Therefore, he suggested taking all communities on board, borrow freely from all 'personal laws' while framing UCC and come up with world's best Civil Code. Justice Shah beautifully summed up his views in the following words:

"Let us have a Uniform Civil Code, but do not close the possibility of an individual's right to exercise his personal law. It, however, shall be ensured that the personal religious law does not violate the provisions of the common law."

He opened the talk stating that UCC is completely misunderstood by the communities, as it does not propose to restrict their personal & religious customs, practices and rituals. UCC is not about achieving Uniformity of Religions. For Hindus, religion is a personal matter. UCC is all about Marriage & Succession. He reminded, for example:
a) Who would be benefited by the Monogamy Act in UCC? It is the Muslim Women.
b) Who would be benefited by Succession Act? Hindu Women, as Hindu law allows husband to de-recognize wife & daughter.

He argued further, when we have Evidence Act, Contract Act and Transfer of Property Act and other such legislations as common for all communities, what prevents us from having a common legislation concerning Marriage and Succession? Mr. Krishnamani summed it up: Despite the favourable orders from Supreme Court, lack of political will is the only problem.

Last speaker on the panel was Mr. Manish Tewari. I am still wondering as to what Manish Tewari was actually doing among the judicial luminaries such as Justice Thomas & Justice Shah. His entry to the discussion seemed half-hearted and irrelevant. Clearly a misplaced choice on the part of the organisers SASTRA group. Apart from digressing to mention his liking for having a few drinks in the evening, he hardly contributed to the discussion otherwise. However, he managed to put the usual stamp of the band of loyal 'Congress Lawyers' on the debate, explaining as to why UCC is irrelevant, taking shelter under the garb of "Secularism" and "Liberty", both of which did not quite relate in any way to the discussion on UCC.

Then it was time to extend the discussion to questions from the audience addressed to the panellists. Unfortunately what followed were the 'views' rather than questions, which Mr. Gurumurthy as the moderator, managed to handle well. One of the enthusiastic audience even questioned the selection of panellists, asking why a 'Muslim' Judge from the Supreme Court was not invited? To which, Shri Gurumurthy in his signature spontaneity & wit responded: We don't look at the Judge of Supreme Court as a 'Muslim'. It was also clarified that MJ Akbar was supposed to be joining the discussion but could not make it due to some other pressing engagement.

Finally, Shri Gurumurthy during his vote of thanks, highlighted the point that none of the speakers even once talked about Hinduism or Hindutva during the discussion. He also clarified that to raise issues of a particular community, it was not important to have speakers from the respective community and moreover, none other than Mr. Manish Tewari could have handled the 'Secular' torch.