Sugata Bose, The Rockstar of SLOB ...

Dr. Sugata Bose speech at Lok Sabha on 24-Feb-2016 was shared & liked by the SLOB (Secular Liberal Outrage Brigade) Intelligentsia, last month. Here is the link to that speech: 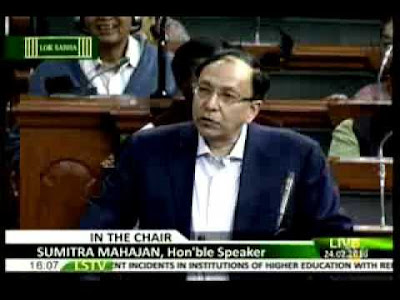 I am quoting from FB & few other comments just to get the idea across as to how well it was received & admired by the SLOB crowd. (I am keeping these comments anonymous as I don’t want to drag names and people into this post making it personal)

Everyone should be watching this speech rather than the chest thumping misleading rhetoric of Smriti Irani. Watch the grace with which mr Bose makes pertinent points. U need not shout to put across a point. Remember empty vessels always make more noise.

This is how an educated person speaks.. can see the difference..﻿

no theatrics but pure content which makes perfect sense ....but not to all.﻿

One more, and this is The Best:

He still carries the legacy of Subhash Bose ..People like these are real hope for India.

So the Key-Words that actually blew the SLOBs away are are:

I was amazed at the complete bankruptcy of rationale and reasoning among the SLOB Bhadralok, who claim to be coming from ‘liberal’ ideas & ‘rational’ thought.
Bogus! Totally Bogus claim, I must say.
Neither are the SLOBs ‘Liberal’ nor ‘Rational’ from any stretch of imagination.

From time immemorial, SLOB Intelligentsia in India has been a salve of ‘Oxbridge’ style oratory and presentation skills, irrespective of validity & authenticity of the Content and least important is the Intent.

This begs the Question: Where is the Reason & Rationale?
Someone with very basic education and an average common-sense would throw the above logic out of the window.

But then, for the SLOBs, the Slaves, key-words mean a lot more than anything else!

Let us take a quick look at Dr. Sugata Bose - his illustrious pedigree, lineage & background.
PHEW! The man is indeed a Pedigree straight from a Legendary & illustrious Lineage one could only dream about.

Remember always, the Key-Words matter a lot to the SLOBs:

All of this put together is one hell of a Rockstar Pedigree, perfectly fit case for a celestial position in the galaxy of LIBTARDS and LEFT-LIBERAL intellectuals that we now know as SLOBs.

Disclosure: Below details are obtained from Wikipedia Pages and hence they are as valid as Wikipedia itself.


Ayesha Jalal (Punjabi, Urdu: عائشہ جلال‎) is a Pakistani-American historian. She is the Mary Richardson Professor of History at Tufts University and a 1998 MacArthur Fellow.

The bulk of her work deals with the creation of Muslim identities in modern South Asia.

A leading historian of Pakistan as well as South Asia, Prof. Jalal has received numerous awards and acknowledgements including the Prize Fellowship from Trinity College (1980–84), the MacArthur Foundation Fellowship (1998-2003) and the Sitara-i-Imtiaz, one of Pakistan's highest civilian awards, in 2009.

The Sitara-i-Imtiaz (Urdu: ستارۂ امتياز‎), also spelled as Sitara-e-Imtiaz (English: Star of Excellence), is the third highest honour and civilian award in the State of Pakistan. It recognizes individuals who have made an "especially meritorious contribution to the security or national interests of Pakistan, world peace, cultural or other significant public endeavors".[1]

Remember, some kind of Pakistan connection is very important to be in the league of extra-ordinary elite intelligentsia in India. This adds to the glamour, aura and the charm of Lineage, the gharana.

Some SLOBs are so ignorant that they might even object to this mention of the 'Partner' detail, arguing that personal life of Dr. Sugata Bose is none of our business. The ignorant SLOBs may like to know that when an elected Member of Parliament of India lives with a Pakistani 'Partner', I do have serious problems with it.
***

Let us now move over to the extended members of the Bose Family and look at what they have got to say and comment about the SLOB Rockstar, Dr. Sugata Bose.

“Around 50 members of the illustrious Bose family have closed ranks against the Harvard University professor, opposing him on the ground that his stance on declassification of the secret Netaji files is 'unprincipled'. The family members also believe that Bose has failed miserably as the secretary of the Netaji Research Bureau (NRB) in Kolkata that had been set up to conduct research on the great revolutionary and archive material on him. “

"It is unfortunate that a member of the family has joined politics after being nominated as a candidate, rather than to serve society. Sugata has been living and working abroad for the last 30 years and he hardly knows the Jadavpur area. He should have, at least, resigned from the post of the Presidency University mentor committee chairperson which he hasn't. Perhaps even more shockingly, he has termed the demand for declassification of Netaji files a "non-issue". As a family, we find that unpardonable. We will oppose Sugata politically," said Chandra Bose.

Members of the family have also taken exception to the frequent references to Netaji being made by Sugata Bose in the course of his election campaign. "He has been mentioning the names of Sarat Chandra Bose, Amiya Kumar Bose and other respected members of the family, apart from Netaji, when actually none of their descendants are supporting his candidature. What is even more disgusting is that he has been using the "Delhi chalo" slogan, which was coined by Netaji as a final call to overthrow the British. In this case, of course, he is echoing his party's call to capture political power in Delhi. It is sad that he is devaluing a historic slogan for political gain," said Bose.

In the 'landmark' transcript that he read out in Lok Sabha, he started off by saying that he has spent three & half decades teaching students. He also strongly advocates 'Freedom of Expression' by young students etc etc.

Presidency students say ‘no’ to Sugata as head of mentor group

Around 1,208 students voted in favour of Bose’s resignation, while only 316 students said he could continue holding the post.

Trinamool Congress Lok Sabha candidate professor Sugata Bose Friday lost a referendum held by students of the Presidency University on whether he should continue as chairperson of the elite institute’s mentor group after joining politics.

“He should resign now as the mandate of the students is clear. We do not want to bring politics into the management of the university and since he is now a political person he should resign,” Presidency’s Students’ Council vice-president Amardeep Singh said.

The mentor group was set up by West Bengal Chief Minister Mamata Banerjee to provide recommendations and a roadmap to turn Presidency University into a pre-eminent institution of learning of international repute.

Nobel laureate professor Amartya Sen is acting as an advisor to the group.

Someone who sermonises on "Right to FoE" by 'Young Students' and condemns "onslaught of State forces on academic freedom" in typically Harvard style, it would be a shame if he still continues to sit there on the Board of Mentor Group, hiding behind legalities framed by his own Party. 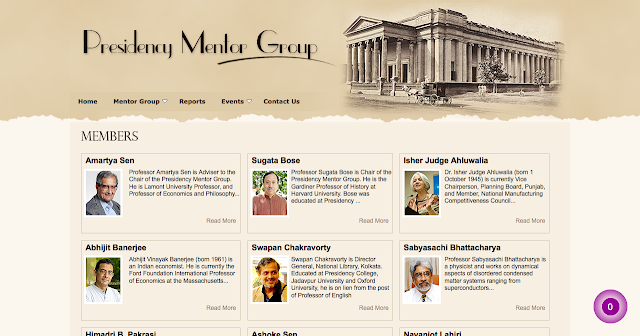 By the way, did you notice he is in the august company of another luminary - Dr. Amartya Sen. At Nalanda as well as at Presidency - both are together in the Mentorship Roles.

He further reads out from the 'transcript' in Lok Sabha that in his Home State, West Bengal administration led by Mamata Banerjee "knew how to diffuse tension and to not unnecessarily escalate the crisis. It knew how not to over-react". And some more lofty statements, "We must give our students & youth freedom to think, the freedom to speak, the freedom to be idealistic, and Yes, the freedom to make mistakes, and learn from them." So Perfect, word by word!

Now the reality, the below news appeared just two days after the great speech and mesmerising words, shows how TMC the political party that he represents, treat their University students in their home state.

Students of Burdwan University were staging a demonstration, when Trinamool Congress workers’ union members allegedly barged into the university campus and started beating up students to disperse them. Members, sporting wooden sticks did not spare female students and they suffered serious injuries. Workers’ union members allegedly went on a rampage and ransacked the university campus.

So, while Dr. Sugata Bose comes to Delhi to read out a well-crafted transcript of his 'academic' speech, laced with long & lofty sermons at Lok Sabha, his AITC Party workers are busy demolishing the the very same ideals.
***

This is how an elite academician, after 35 years of teaching at Harvard & elsewhere, ‘Partner’ of a Pakistani National, acquires membership of a corrupt political party, gets elected from mother’s constituency quoting Bose pedigree (of which 50 family members are already dead against), Member of elite Mentor Group at Presidency & Nalanda University, stays put shamelessly inspite of losing the Student Referendum, reads out a well-prepared, well-rehearsed speech with Oxbridge Grace and Composure, and... totally blows away the SLOB Intelligentsia.

This couplet is for Dr. Sugata Bose, I am sure he would understand Urdu better than Hindi or Bangla: