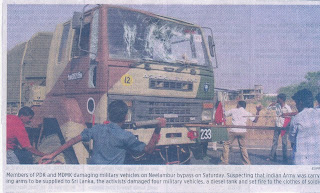 Indian Armed Forces convoy was attacked by Civilian & Political Hooligans. Shocking pictures of this act appeared all over the Indian Press on Sunday, 3rd May 2009. I could not stop asking myself if such a degenerated, uneducated and misguided Indian society really needs to be protected and is worth the Blood and Sweat of brave soldiers and Jawaans of our Armed forces?

Are these pictures not a mockery of our democratic rights and freedom that we have grown so used to and is taken for granted? These pictures are proof enough that we have crossed the line dividing the cherishing, protecting and enjoying the democratic freedom over to abusing it. I see no difference between this and 26/11 Mumbai – in fact this is even worse than a 26/11 as the enemy is among ourselves and the attack is from within.

There can be no justification whatsoever for such an act. Nothing will happen and nobody will ever get punished for this act. Indian judiciary will sleep over it for years and then one morning handout a historic judgement to let these guys go out with a token punishment. Unless, the nation calls for a total & complete boycott and a ban on the political organisations behind such an act - not just the frontline goondas and hooligans – they are only the messengers. Unless, the leaders of these organisations are punished by the Indian voter to lose their deposits, never ever to come back asking for votes.

As for these hooligans, they should be forced to wear the Indian uniform and packed off to be air dropped in Af-Pak regions to fight and save their own lives, for wild animals should be left where they belong. They have to earn their freedom and survival and only then will they know the very meaning and importance of it - and also learn to respect the very people who provide them with Free & Sovereign India.