June 22, 2009
Waited for a couple of weeks to get all the dust settle down over this issue and for the media attention to deviate to some other breaking-news after this “TOI-Times Now” joint sting operation of the selling of seats and rampant corruption in admissions in Private Medical colleges.

Just one basic question – did we all not know about it already? Why we Indians are in this mode of perpetual denial of the crude reality around us? What this sting & expose is all about? Looks like it is just to create some cheap media sensation and a discussion leading to nothing at all, except for some instant spark in the viewership (TRPs) and circulation of the Times group. Everyone then goes back to conducting their respective businesses, right from the willing parents to the Medical Council.

Two consenting parties, even better if called as traders – the student and the institute, are negotiating and transacting business in a peaceful manner. Why should it bother anyone and why take the pains and spend good money on exposing some dirty business which everyone already knows about? Each one of us are very well aware and are deep into this mess all together - including the innocent and naive public (?), smart and watchful media (?), educated and wise teachers (?), ambitious students & their desperate parents with tons of Cash, Extremely efficient & honest Medical Council of India, neat and clean state and central governments (?) – all are in near perfect order and harmony. So what are we talking about and why blame the institute that is putting up a cost to offer a seat? OK, the transaction is in Cash and without a receipt – that’s it? We should be rather proud to have so much of Cash within the country, in spite of all this recession, bad economy and the job losses etc, making it that much more convenient for the Govt. Of India, not to plead and run behind the Swiss Banks to bring back the slush funds. 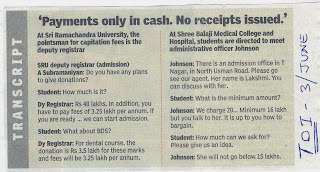 Above image is from the front page of TOI dated 3rd June 2009. Look at the transcript of the conversation - the clarity, the rules, the straight-forwardness, No grey areas, No confusion, No fuss – pure simple business.

Politicians are behind every single private educational institution run by a Benaami partner and we do not need no sting operation to find this out. Higher Education & Health are THE MOST favoured businesses / investment options from “Return on Investment” point of view as far as the Black Money is concerned. The who’s who of the Board of Directors of any organization is an open-source information and in public domain. It has been more than two long decades that Mr. Ketan Desai is successfully and notoriously running the Medical Council of India, which has been branded as a “Den of Corruption” by none other than Delhi High Court (Ref: TOI Front page of 6th June 2009). Is this at all possible without a government or political sheltering / support? So it is no surprise that Mr. Desai is on the Board of such an institution which happens to be a Benaami of a Cabinet Minister.

Are we not missing a BIG picture here? I have not seen anyone writing or talking about it in the media. And this is not restricted only to Medical but also Engineering Colleges. WHO is paying such an indecent amount of money in Cash and Without receipts? Institute will not demand a price for a seat unless there are real & willing customers (students / parents) to buy. Clearly it is market driven and dictated by a universal demand-supply theory. This opens up many more unpleasant questions – where this money is coming from? Are we not supposed to question the source of such funds that common people among us are willingly doling out in Cash and without any receipts? Should the authorities not trace back every single student (now the well placed and respected doctors / engineers somewhere)& their respective parents as well, who has passed out from all such colleges and start asking them uncomfortable questions about the source of such funds? What level of quality (medical / engineering) education is being dished out from these colleges, for some of these colleges are affiliated to UGC even when not one single batch has passed out? These children, once they pass out as future doctors or engineers, will have the sole objective of making this money out, in the shortest possible time, playing around with the lives of other common people.

WE can continue to blame the politicians and the policies till eternity but what are WE, the common people, doing about it? Unless, WE the people, stop sending our children to such institutes, stop paying money in Cash without receipts, start demanding the quality education for the good money well spent on our children, these institutes will continue to flourish and no sting operation is going to hurt nobody, but our self & the nation in the long term.