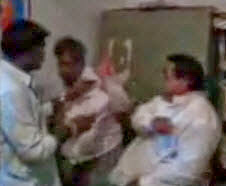 It all actually started when Congress Party decided to BUY the non-congress MPs for last year’s UPA trust vote – and this is what they bought - a bunch of uneducated, uncultured & uncivilized thugs. Manda Jagannadam, the Congress MP from Nagarkurnool constituency in AP is one such case, who had switched loyalties from TDP to Congress during the UPA confidence vote last year.
Now that he was well settled in the Congress camp, he shows his true colour by walking into AP Grameen Vikas Bank and misbehaving with the Manager Mr. Ravinder Reddy to the extent of even slapping him. He then goes on to say that he was just trying to pacify the Bank Manager by putting a hand on his shoulder but accidentally it touched his cheek – Tsch! Tsch!! Poor innocent Mr. Manda. His misunderstood and misinterpreted act got canned on a live camera and he could not get away with his humble act. Then the usual Tamasha starts – political noise, frantic phone calls, political points, the breaking news and repeated clips for the next 24 hours, followed by a Happy Ending typical Bollywood style - where nothing has changed, before and after, the Bank Manager is happy for getting an unconditional apology from Manda, and Manda is happy for he is where he was, still with the Congress; and life goes on.

More importantly, during the peak of all this drama was a debate on Times-Now News Hour. It was very interesting to watch the educated, polished & “politically correct” young dudes - Manish Tiwari of Congress, Nalin Kohli of BJP, and the super cool quiz master Derek O’Brian (the brand new Brand Ambassador of Mamta Didi of TMC) – all coming together crossing their respective party lines for a common cause – to protect and support these thugs & unruly crowd in their respective parties. They all felt very offended & went emotionally ballistic when they were bunched together with the likes of Manda and protecting the fellow politicians of their respective parties for uncivilized actions. Yet none, and I repeat, NONE of them came forward with strong condemnation of the act and the deteriorating culture and conduct of their fellow politicians. When pushed for a demonstrable action required on behalf of Dr. Manmohan Singh & team, we only heard the usual remarks advising the public & media to be patient, enquiry commission report, legal technicalities etc. The speaker from Professionals Party of India made a brilliant comment that it is not the fault of people like Manda, for they only know this behaviour given their background and track record; it is actually the fault of political parties that support them and give them tickets and seats. The ever so pretentious and proud Derek O’Brian was his true aggressive self, shouting nonsensically in response to this statement.

It was clearly evident that when it comes to owning up responsibilities and showing some demonstrable actions, all political parties in the current system fail miserably.

Mr. Manish Tiwari, Mr. Nalin Kohli and Mr. Derek O’Brian may like to know that any person (Yes, even a politician for that matter) is judged by the company that (s)he keeps or the group or political party (s)he supports . Wonder if these guys would ever be MAN enough someday and stop hiding behind the technicalities of law and politics. Till then, it is safer and better that they are all painted with the same brush as Manda.