Is it Maoist or Socialist terror? 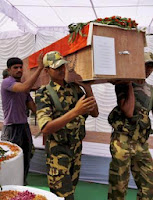 It was a heart-rending sight indeed on almost all the leading news channels last night. 76 out of total 82 CRPF Jawans were laid to rest inside those Boxes. These 76 CRPF Jawans gave away their precious lives to the nation, fighting Maoist insurgency in the jungles of Chattisgarh. They leave behind dependent family members, widows with small children, who will now face the brunt of it all for the rest of their lives. An old man who had not even recovered from the loss of his son in this horrific incident was already talking about sending his next son to fight for the same cause. The injured hospitalized Jawans who were fortunate to survive the attack, talked about going and fighting back. With Moist, not Maoist, eyes I thought - This is the India and a true Indian spirit one would die to live for.
The question remains – Is it all worth it? So very unfortunate but the number of casualties and this incident will simply go down on record as mere statistics, in the files and offices of our Babus and Politicians - and their life would go on to the next promotion and the next election respectively. India too will soon forget the tragedy.

While the nation pays them last respects and tributes, and prays for the well-being and settlement of those 76 terribly grief-stricken shattered families, it is the Politicians and Babus of this country who must be asked and forced to answer some very uncomfortable and inconvenient questions. Nobody would ever come to know what exactly happened and how it happened? What were the chronological events that lead to this horrific attack? Where are all the leaders from the Central and State Governments and other State Agencies (CRPF and Police)? Who was supposed to be on top of this Joint-Operation?
I was rather disappointed with Arnab Goswami at Times Now for running a totally irrelevant debate on Maoist Terror over last 2-3 days, almost leading to Jingoism. It was more about who is on which side as if taking an IPL poll. Rather than to ask relevant and serious questions as to how and why it happened at the first place and who was responsible for this? Surely it is not the Maoist but the State that is directly responsible for this attack. For sending innocent CRPF Jawans without proper planning, equipments and protection-gear into the Jungles and with no proper prior planning required for fighting insurgents in jungles.

A flash back trip into the last two decades clearly shows that we are now fighting a monster called Maoist Terrorist, created by our very own Socialist State and Policies. Consistently, and irrespective of the Congress or BJP or any other regional / coalition government – they all are equally responsible for taking the wrong Socialist decisions, for and on behalf of the local Tribals and Adivasis settled along the Red Corridor districts and states. Where are the policies to empower and educate the local tribals and adivasis? Who is protecting their rights and honor as a citizen of this country? Who is protecting their property? In the name of Liberalization, what the Socialists actually practiced is Crony Capitalism. The same Mr. P. Chidambaram, in his existing capacity of Home Minister, now declaring an open war on Maoist Terror never considered these states such as Orissa, Jharkhand and Chattisgarh as Human Capital for any meaningful social development in his earlier Avatar of Finance Minister – he merely looked at these states as mines and identified them as Bauxite, Aluminium and Iron-Ore. All these years the local state governments and their agents were busy filling up their respective coffers for the Politicians and Bureaucrats. Every single move towards any kind of social development and infrastructure was mercilessly and meticulously blocked in a planned way. An educated and developed Tribal or an Adivasi was not at all desired by our Socialist politicians, fearing that it would block their free supplies and family businesses arising out of their personal State property and land-banks. In the year 2005, all these stake-holders got together and legally created an army of unemployed gangsters, hooligans, ruffians and criminals duly funded by the State and aptly named it as Salwa Judum – which means – Collective Peace Campaign. So that they all could run their personal mining and State businesses, collectively and peacefully. Wow!

So what happens to the Tribals and Adivasis then? The State does not need them and want to push them deeper and deeper into the forests to create the Land-bank for mining purposes. The Police beat them up all the time. The Salwa-Judum got the State License and the Guns to kill all the Men and Rape Women, at sight. The courts would not hear them. As for the Media, this is not breaking-news material and something that would not heat up their TRPs to bring them higher returns. So the poor tribals start getting together slowly and find comfort and support in Naxalite and Maoist forces. This was the beginning and the birth of a monster that we would call Maoist Terrorist. Maoists gained in terms of their strength in sheer numbers by as much as 22-times, after Salwa Judum started their so-called peace operations.
Any kind of insurgency basically erupts as a direct end result and consequences of years of neglect, discrimination, poverty, corruption, social inequality, lack of development and education, ineffective law and order, totally corrupt and inefficient governance. This is what the Socialist Governance has given to states like Orissa, Jharkhand, Chattisgarh etc. in particular and to the country in general.
I am no supporter or sympathizer of Maoists, No not at all. But also I am not a fan of Socialists. Whatever the Socialists leadership has been doing to the country for more than six decades now, the Maoists are starting to do it now. This probably clarifies and explains the topic of this post. I personally believe in Liberal principles and policies where every human life is guaranteed with equal opportunity, and treated with equal dignity and respect. And everyone has the freedom to pursue his or her own happiness under an accountable and participative government.