FDI in Multi-Brand Retail saga has played out over the last one year and finally ends up as a diversion-tool to the Coal-gate scam and a face-saver for Dr. MMS.

Volumes have been written and hundreds of hours of air-time spent endlessly debating the decision. Arguments For V/s Against the decision always depending upon the ideological background they came from – Left, Right, Right of Center etc. This post is not about the debate on FDI - it is about the Final Analysis, from the perspective of a common-man, keeping it simple yet relevant to the issues directly affecting the common-man.

All major stakeholders, especially the ones who are heard and talked about in Mainstream Media, have obviously taken the stand on FDI in multi-brand retail depending upon their respective stakes and interests involved. A week after the surprise roll-out of the FDI policy last Friday, 14th September 2012; the jury is still out and opinion hugely divided on the decision of FDI in Multi Brand Retail.

I noticed the discussions & opinions against FDI largely revolving around poverty, poor Kirana stores, farmer suicides, rural-urban divide etc. are liberally dished out. Perfect recipe to generate a particular “Popular-Sentiment” among the common-man. These are mostly used as “emotional-fodder” to mislead and influence the common-man to believe that FDI is basically anti-national and anti-poor. Needless to mention that none of these points are supported with any data or valid reports. But there is also a growing segment among Aam-Aadmi that would like to make an informed choice and opinion – and NO, they are not anti-national or anti-poor.

For clarity and ease of understanding the real impact of FDI in multi-brand retail, let us break the discussion into two major segments – Political & Socio-Economic.

POLITICAL: It would be wise not to waste precious space as it is abundantly clear, beyond any doubt, that all of the major political parties have played “politics” over the issue. They were least serious about the economy, the food prices, the farmers, the Kirana stores etc etc. I will quote here just one article from Indian Express dated 30th November 2011, and that would be good enough to conclude this part: 10 years ago, NDA had pitched for 100% FDI in retail sector.

SOCIO-ECONOMIC: Let us now analyse some of the popular “senti-meters”.

Kirana Story: There are about 8 million Kirana (Provision) stores across India. Out of these, about 5-6 Million are located across those parts of India NOT covered under the FDI policy norms, that is, they are outside the limit of the 50 odd cities with a  minimum population of 10 Lakhs. But hold on, that does not mean the remaining 2-3 million Kirana stores will get completely wiped out. FDI in Multi-brand retail will directly hurt but only the inefficient and the least competitive domestic retailer (this includes the Kirana store as well as the organized large retail stores) and force them either to improve or perish. This is the only collateral damage, if you will, as a direct result of international competition. As a consumer, I treat this as highly desirable for the overall economic health and social good. These inefficient and unhealthy retail entities would not be treated with any brute force or muscle power but by simply offering Competition and Choice in the hands of the end-consumer. So the consumer eventually enjoys a more efficient and competitive Kirana deal. Why should this logic be so difficult to crack?

Farmers story: Before we even talk about any perceived threat or negative implications of FDI affecting the farmers, let us pause and rewind 60 years; let us do some introspection and ask ourselves - how many farmer suicides we have been able to prevent with the help of our Socialist policies and protected markets? Let us try to find one single valid report which confirms that farmers are happy selling their produce to APMC (agricultural produce marketing committee) yards. Opposing the FDI decision would simply mean the status-quo be maintained and our farmers continue to lay their lives for the argumentative and socialist Indian.

Quoting here from an article linked: Consortium of Indian Farmers Associations (CIFA) Secretary General P Chengal Reddy welcomed the move saying that it would help in raising the income of the farmers.

Voices against the FDI decision have consistently failed to substantiate their views with data and reports against the FDI reforms - no case-history, no past-performance data, no examples; against FDI. Most of it has been worrisome forecasting and imagination. Thanks to the flawed and  “mixed-bag” of Socialist policies over the last 60 years, our farmers and the poor have turned into Statistics, instead of precious Human Capital. These numbers are not “due-to” but on the contrary, for the “lack-of” freedom of choice in the hands of common-man, including the Small and Marginal Farmer (SMF). Precisely for this reason, there are vested interests - political and otherwise, trying to oppose and block reforms. The rest of us are following empty rhetoric and loads of misleading information.

Employment story: Without wasting too much space, Let us ask ourselves – where is the employment plan for the millions of our young graduates over the next 10 years? Agriculture sector is already over-crowded as too many people in our country live off agriculture, making it the most inefficient sector. Manufacturing sector is just crawling and nothing exciting is happening here to absorb millions of graduates. IT and ITES economy is already feeling the effects of a slow-down and saturation, even if this sector remains the best bet currently, it would not be able to absorb the huge numbers of graduating young India. That brings us to the Retail sector: organized retail market is only 5% of the total retail market size in India - this is the situation 20 years after the first round of economic liberalization.

Many domestic corporates entered the Multi-Brand Retail sector as large organized retail format stores during the last 10 years, with lot of noise and huge investments. While some have already vanished, almost all of the current players are still looking to break even. One such first-generation corporate, perceived to be one of the most successful, with supposedly very efficient cost-management and highly trained with the ground realities of Indian Retail, is currently suffering operating losses of, hold your breath, 5000 Crores. So much for those offering valued opinions and Swadeshi arguments for protecting Indian companies to develop and exploit the retail market.

Given this situation, opening up of Indian Retail through FDI route to the foreign companies would be the surest way. Going by various reports and this news article, it would generate an employment of about 10 million over the next 10 years horizon. Of which, 4-5 million would be directly employed, while the rest indirectly employed. We can agree that this is just a projection and it may or may not happen, but do we have Plan B? 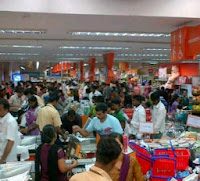 Consumer Story: The total volume of retail market in India is valued at something like US$ 450 Billion. How about listening to the consumer who actually contributes to this massive size of the Indian retail market? We have heard many voices against FDI reforms from various sectors who want to protect themselves from any kind of external (read Global) Competition. Consumer will be the biggest loser if she is denied a wider choice, better quality, cheaper price.
Wonder why FDI is being treated to be some kind of a Charity or a Saviour to solve all our Socio-economic problems? It is pure commerce and it must be viewed that way. FDI is not an NGO coming to India to solve all our problems of infra-structure, storage, supply-chain and help improve agricultural economy. No, let us first get that out of our Socialist mindset. A market worth $450 billion, with an ever growing young and middle-class population is a dream market for a retailer. NDA government in the year 2002 had proposed opening Indian Retail market through FDI for 100% @ US$ 10 Million entry ticket. UPA puts up a price tag at 51% @ US$ 100 Million in 2011-12. Retail Sold at wholesale? I wonder!!

Furthermore, we have examples in countries like Brazil, Argentina, Chile, Indonesia, Malaysia, Thailand etc where 100% FDI in multi-brand retail has worked out. I have specifically avoided mentioning China only to avoid trigger an unnecessary debate leading to the typical comparison between India and China.

FDI is not enough: In order to enjoy the full potential of FDI in multi-brand retail and to draw maximum advantages, India needs urgent back-to-back reforms to provide sound policy and regulatory environment. Some of the key areas crying for reforms and policy guidelines are: Manufacturing, Agriculture, Consumer Protection Laws, Labor Laws. Without these key reforms, FDI as a stand-alone reform will never be able to help India achieve the desired objectives.

In the final analysis: The debate should not be over whether or not to allow FDI in multi-brand retail, but about the the Process, Safeguards, Regulatory Framework - “Terms of Engagement” - the term (meaning MoU or an Agreement) currently in fashion among the corporate culture of USA.