"The problems of the world cannot possibly be solved by sceptics or cynics whose horizons are limited by the obvious realities. We need men who can dream of things that never were."

This is a follow-up of the earlier post: Decoding NaMo : From a Classical Liberal perspective

First off, let us understand the very concept of “Lutyens' Delhi”.

If we look at the political history of India since independence, we notice that all of these years, we have been governed by a small group of people, hailing from a particular area of Lutyens' Delhi called “Lutyens' Bungalow Zone” (LBZ), which is spread over an area of about 2800 hectares.

Poweratti: These people have worked their way up, either by virtue of their fine “pedigree” or through a high-powered social network and connections (read Coterie of Nepotist and Crony-Capitalists). In any case, they are obviously used to a fine life, full of “self-entitlements” and “perks”, which naturally come to them with the package of unbridled powers. This tribe of “Poweratti” from Lutyens' Delhi would have been to the same schools & foreign universities, to JNU / DU / Gymkhana Club, spend time at the same golf course and social clubs. They would never take an extreme position on anything so as not to disturb the apple-cart. Poweratti includes Politicians, Diplomats, Bureaucrats, Industrialists, Advocates, Journalists, Authors, Property-Dealers, Socialites, Historians, Artists, etc etc. When the property prices go down across India, Lutyens' Delhi is the only place they are always headed in one direction – UP!
Poweratti have their individual fiefdoms and exclusive power-centers, with a tacit understanding to respect (read “feed & support”) each other and always stay together to protect their tribe from “external” disturbances.
The Socialist “Poweratti” primarily thrives and feeds on the very idea of doing something good for their country and providing social-welfare (read “crumbs”) to the billion poor people. They are under tremendous amount of pressure to control all the pillars of our Democracy: Executive, Legislature, Judiciary and most important, the fourth pillar: Media. There is no place for Extreme-Right or Extreme-Left in this elite club. They generally come from a Liberal-Left or a Socialist background. They are rooted in their past in that they like to romance with the idea of Lahore and Karachi with a typical elitist pride. This is the kind of “gated community” where no outsiders are allowed.

Sorry to take so long but its not easy to introduce & define the tribe of “Poweratti” in few words.

So these are the people who have been running the state of affairs of this nation on behalf of a billion fellow citizens as their “representatives”, since independence.

The BJP stalwarts, including ABVajpayee, LKAdvani and top rung state-less national leaders always have had their due place among the Poweratti of Lutyens' Delhi. So the idea of BJP forming the government at the centre once in a while is good one for a vibrant & healthy democracy.

But things started to get out of control of the Poweratti post UPA-I, when the skeletons of years of their “hard-work” started showing up in public, one after another.

Meanwhile, not too far away, someone in the rustic surroundings of Gandhinagar started getting national & international recognition and prominence for his fine work. Enter, NaMo! Who? Narendra Modi? The nobody from the state of Gujarat who speaks not-so-fine English and has all the wrong ideas about India? Everything that he talks about in public is fundamentally anti-Poweratti and will completely destroy the “peace and tranquility” of Lutyens' Delhi.

Sure enough, the caretakers of Democracy in Lutyens' Delhi started weaving their Rajneeti as one big team (politicians, bureaucrats, journalists, brokers, counsels - all highly networked and cross-networked components of the Poweratti), to somehow keep this Man away from New Delhi and disturbing the status-quo that they have enjoyed for six good decades.
More on this and the related events in next post, but for now, lets stay with NaMo.

NaMo is an outsider and does not fit into the very idea & definition of Lutyens' Delhi politics & culture. Imagine 100s, if not 1000s, of rich and famous suddenly going around job-less and power-less in Lutyens' Delhi. The defeat and battering at the hands of an outsider & a first-timer, with no family background and godfather in national politics, will be extremely insulting when it goes down in the history of Lutyens' Delhi. 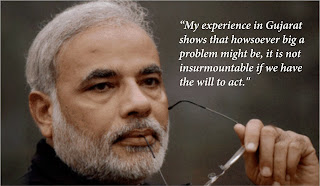 NaMo, going by his fearless and straight-from-the-heart utterances in all his public meetings and his past performance as CM, looks like he will change the very soul and fabric of the Polity of India.
Sample these:
MRV, in his book 'A Decade of Decay' has brilliantly argued in a chapter titled: "Modi has arrived. But is India ready?" - NaMo could well disturb the status-quo of the “Poweratti” and bring in a fresh perspective of a free and liberated democracy to the common man. I quote few lines here:

"Under our Constitution, the Supreme Court need not function only out of New Delhi. The founding fathers of our constitution foresaw the necessity of setting up benches in various parts of our country. And to this date there is no talk of setting benches of the Supreme Court in different parts of the country. This has made justice physically inaccessible for our countrymen hailing from remote corners."

"But who are the beneficiaries of this centralised system? Obviously, the senior counsels of Supreme Court and sections of our judiciary. From Constitutional Law to environmental law, from Criminal to Company law, they -- a dozen or two of our senior counsels -- are gateway to law and justice for a billion plus people!..."

"Modi could ensure, for instance, benches of the Supreme Court at Coimbatore, Nagpur, Guwahati, Udaipur, Pune and probably Patna..."

I am reminded of these fine lyrics from a song (Mehangai) in one of Prakash Jha film Chakravyuh.
Let us ignore the Communist (Lal Salaam) colour to the song, the lyrics of which beautifully capture the state of affairs of our nation and the current politics.