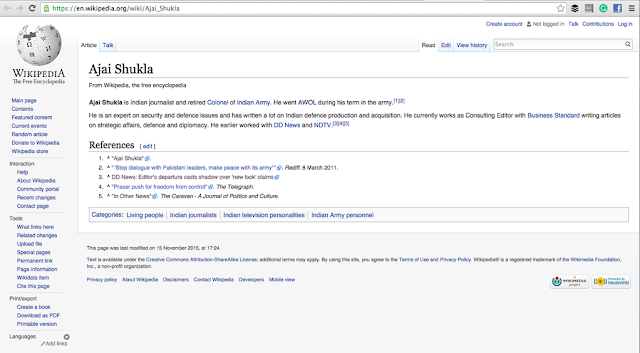 
The Wikipedia page has since been updated to "delete" AWOL and insert the adjective “Prominent” before Journalist, by none other than the "Half-Colonel-Turned-Journo" himself, as per the latest screenshot below: 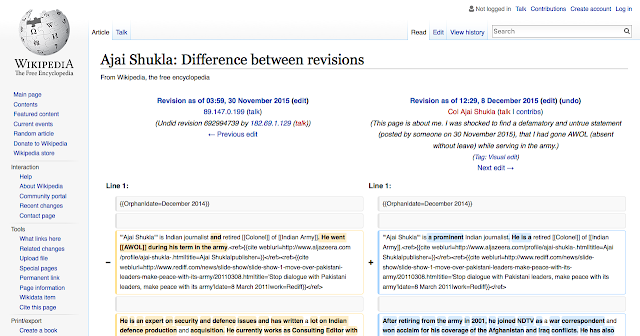 This little introduction was needed just to establish & understand the true profile of Half-Colonel-Turned-Journo : Ajai Shukla.


We will be discussing the “expert opinions” of Ajai Shukla, published on two different media platforms as follows:


Why the Pathankot op has gone on for so long
Rediff.com Dated 5th Jan.

Inept handling by the National Security Advisor transformed what should have been a short counter-terrorist operation in Pathankot into an apparent debacle, argues Ajai Shukla.

Let us now look at the lies & distorted facts, passing as “expert opinion”.


I am not a "half-cooked" journo promoting myself as "prominent" to be able to offer "expert" rebuttals. Hence, my rebuttal with FACTS are simple quotes, borrowed from a TOI report dated 6th Jan, Planes left Pathankot air base after intelligence alert :

FACT: "Responding to the criticism that the Army was not deployed, sources said Army chief Gen Dalbir Singh Suhag and IAF chief Air Chief Marshal Arup Raha were involved in crafting the response as soon as the intelligence agencies cautioned that terrorists could be heading towards Pathankot air base."
"We flew the planes out while army personnel threw a cordon around ammunition and fuel dumps as well as radars and Air Traffic Control installations," said a source.

LIE # 2: "When the NSA met the army chief on Friday, he asked for only two columns of soldiers (some 50 troops)."

FACT: "Official sources said that 9 columns of Army were called in along with Gaurda commandos of IAF"


***
LIE # 3: "Intent on directly controlling what he anticipated would be a walk in the park, and without anticipating that there might be more than one group of terrorists, Doval led with his trump card -- he ordered 150-160 National Security Guard troopers to be flown down immediately from New Delhi."

FACT: "Two columns of NSG and Punjab Police were mobilized."


LIE # 4: The DSC, composed of retired military veterans well past their prime, can hardly repulse a well-equipped and motivated terrorist suicide squad.

My Comment: Colonel proves that he is indeed AWOL, as only such a shameless character can use defamatory description of the Brave DSC, as evident from the below tweet: (Emphsis mine)


Now that we have settled these LIES, here is the HIT-JOB: Both above columns conclude with the same parting shot and I am reproducing as it appeared, so that readers can judge for themselves:

If Mr Doval wishes to provide real options to his boss, he must stop dabbling in day-to-day intelligence operations

Get the picture now? the bottom line is loud & clear with these concluding remarks on both columns - A classic case of a “hit-job” journalism on National Security Advisor, Mr. Ajit Doval. Somehow, keep repeating the same across different columns - Get NSA out of the “Day-to-Day Intelligence Operations” - Why? Your guess is as good as mine!

Meanwhile, another article appeared, also on 5th January and on Rediff itself: 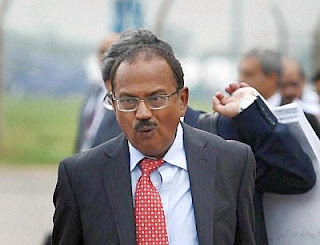 Ajai Shukla's column is another example of the pathological hatred within a section of armchair columnists towards Narendra Modi's establishment.


Ajai Shukla was not done yet with his dirty assignment, and went ahead with an interview published once again at REDIFF.Com on 6th Jan:

'The information we had was pure gold'

LIE # 5: 'You seldom get information of this kind several hours in advance, exactly where they are going to strike. But we still couldn't act on this intelligence.'

Alerted by intelligence about the presence of the jihadis and their designs on Pathankot air base, the Centre got the IAF to remove its birds from the forward operating base at least 6 hours before the terrorists managed to breach the outer perimeter, disclosed sources.

Ajai Shukla conveniently forgot to mention this critical development, in his excitement to show Mr. Ajit Doval in poor light.

LIE # 6: 'What should have been done immediately upon receiving information about an impending terrorist attack is to secure the airbase, which means putting a large number of people at various pickets all around the airbase.'

FACT:  "We flew the planes out while army personnel threw a cordon around ammunition and fuel dumps as well as radars and Air Traffic Control installations," said a source.


My Comment: The expert did not know the facts it seems. Neither he bothered to check with his crony journalists on the actual ground situation and turn of events.

LIE # 7: Here comes the worst LIE, in the form of brazen Insult and Defamation of National Security Advisor: (Emphasis mine)

"It is quite obvious because he (NSA) wanted the credit for himself. And this is how Ajit Doval functions. He is a credit-seeker."

Q: Seeking credit at the cost of national security?"

Mr. Ajit Doval says: “In that respect, as a counter-terrorism response, it is a highly successful operation for which our Army, Air Force, NSG and Police, which played a vital role, need to be complimented."

This LIE # 7 is the most befitting remark representing the current period we call as Kalyug. Here is a random guy, neither a Colonel nor a Journalist, with questionable past, promotes himself as a “Prominent” Journalist, Lives off 'recommendations' and 'Political' appointments; has the audacity to pass a derogatory comment on the true “Son-of-the-Soil", who has spent his entire working-life serving the country, leading from the front, mostly incognito. Kalyug! घोर कलयुग !!


What a shame indeed !


I would urge all the Twitter & Facebook followers of Ajai Shukla to step back, think beyond politics and reflect on this dirty episode.

Finally, someone loaded with guilt & filth takes an otherwise innocent tweet very personally and jumps in to react:


@abhijitmajumder: Journalists working for powerful arms lobbies were denied access by Doval. So, they want to fix him. Even Anthony had kept them at bay
06/01/16, 11:34 PM

One last thing: This is the typical characteristic of cowards like Ajai Shukla, that of hiding behind the “victim” card after their hit-job is exposed:


@ajaishukla: A measure of insecure the NSA is. After my article on his Pathankot bungling https://t.co/hCnefVeZci Doval's bhakts r smearing me on Twitter
07/01/16, 1:07 PM

Defending Mr. Ajit Doval & his patriotic intentions would be an insult to the very idea of India. It would suffice to quote Shri S. Gurumurthy, who describes Mr. Ajit Doval as follows:

He is in the category of Shivaji and Bhagat Singh in living form..I know him and so I say this

People like Mr. Ajit Doval do not need your certificates or awards or credits, Ajai Shukla.
You will need to take 100 re-births before you could even qualify to polish his shoes.
That, is where people like you belong !!
***