Facts & Data gets buried somewhere deep under all this rubble, crying for time & attention.

Two things happened last week to trigger a national rhetoric:
Both have turned out to be highly emotive issues for India - for those who understand it and even for those who don't. Emotion, connects India.

'Designer Journalists' got busy drafting lengthy editorials, slanted, biased & twisted.
'Eminent-Economists' started practicing social-engineering once again.
Both started weaving a pre-conceived narrative as follows -
Let us now try to apply some simple common sense to the facts & data with respect to DeMo & GDP, as available in public domain.
And, we shall soon arrive at some clarity.

First, the bigger demon of the two - DeMonetisation (DeMo).

As soon as RBI came out with the Data, within minutes a section of eminent-economists concluded that since 99% of the demonetised currency came back to the Treasury, DeMo has utterly failed in its objective of brining Black Money.

The Government of India decided to cancel the Legal Tender Status of Rs.1000 and Rs.500 denomination currency notes on 8th November 2016 with several objectives: (i) flushing out black money, (ii) eliminate Fake Indian Currency Notes (FICN), (iii) to strike at the root of financing of terrorism and left wing extremism, (iv) to convert non-formal economy into a formal economy to expand tax base and employment and (v) to give a big boost to digitalization of payments to make India a less cash economy.

Some people had expected a very large shock to economic growth on account of demonetization. Their expectations have been belied. 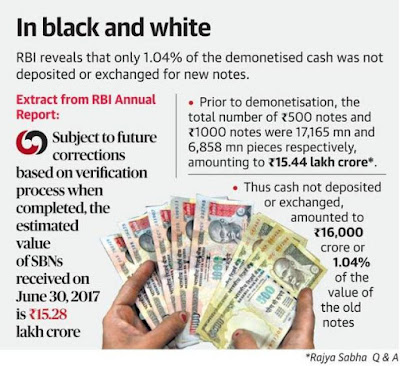 
All the noise & chatter terming DeMo as a failure is based on the flawed presumption that DeMo was a single-Objective exercise for Black Money. The fact is there are multiple objectives to DeMo. A series of actions triggered as a follow-up to DeMo, need to be factored & assessed before quickly jumping to conclude the failure of DeMo, or otherwise.

BLACK MONEY: Those who are very emotional about Black Money may like to know these facts:
So, from a common man's perspective, the government has indeed effectively flushed out Black Money to the extent of 3.35 Lakh Crores.

The aggressively funded, SEO & HashTag energised web-mags, that invade the privacy of our digital lives every single hour via Facebook and Twitter, will never bring these facts to light.

Income Tax Department (ITD) has initiated Operation Clean Money, today. Initial phase of the operation involves e-verification of large cash deposits made during 9th November to 30th December 2016. Data analytics has been used for comparing the demonetisation data with information in ITD databases. In the first batch, around 18 lakh persons have been identified in whose case, cash transactions do not appear to be in line with the tax payer's profile.

Under the first phase of 'Operation Clean Money', the tax department had sent communications to 17.92 lakh people who had made suspicious deposits of Rs 5 lakh and above between November 10 and December 30.

Next up: Operation Clean Money II - Portal ( https://www.cleanmoney.gov.in ) was formally launched on 16-May-2017. 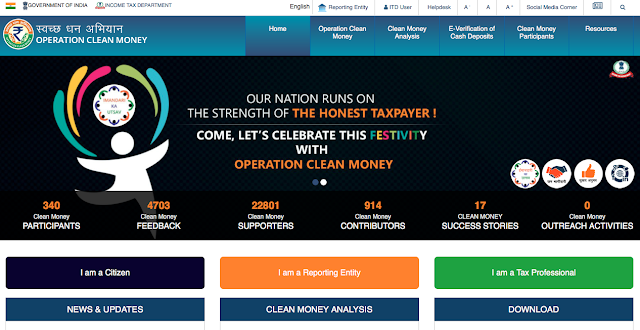 Now, over to GDP.

Let us go beyond these headlines, read the fine print, apply basic common sense to it and get some clarity.

The economic activities which registered growth of over 7% in Q1 of 2017-18 over Q1 of 2016-17 are 'trade, hotels, transport & communication and services related to broadcasting', 'public administration, defence and other services' and 'electricity, gas, water supply & other utility services'.

The growth in the 'agriculture, forestry and fishing', 'mining and quarrying', 'manufacturing', 'construction' and financial, insurance, real estate and professional services is estimated to be 2.3%, (-) 0.7%, 1.2%, 2.0% and 6.4% respectively during this period.


Sectors that primarily have been driven and grown over Black Money during the last 10 years have taken a big hit this Quarter:


(PDF File of this report can be found here)

It is self-evident that when a huge volume of cash is withdrawn from the economy, growth will suffer. But what was implicit in de-mon itself became the charge against it. But this bitter pill was inevitable to course-correct the economy.

What it really means about 'Asset Prices' and very easy to understand is this:
Further, he goes on to bring yet another very important data to light is the Growth in Affordable Housing @ 28% post-DeMo: (emphasis mine)

Liases Foras also pointed out that residential sales across the top eight cities of India had increased, taking the total growth to around 28 per cent post de-mon.

The Confederation of Real Estate Developers’ Associations of India (CREDAI) said: “This will help in construction of more affordable houses and achieve the Housing For All objective by 2022.”

This basically means that 'lower income group' that put their hard earned money into Residential purchase have actually grown @ 28% post-DeMo.

Designer Journalists are a 'limited edition' breed as far as their understanding of anything remotely connected to economics goes. No, the 'Eminent Economists' will never tell this part of the story.
This is what we call as building a 'Narrative'.