February 12, 2021
And then, there are the communists, Blacker hearts still.
They feed on the pus of all this corruption, Like maggots in a corpse!
And like maggots have left a swell, They will eventually swarm like flies,
And spread their rotten philosophy, Across the country and across the world,
Those then, Are our enemies!
~ Inspector Chester Campbell / The Peaky Blinders

Post independence, India had the option to chose & follow a particular path to build its own destiny as a Sovereign Nation State in the new world order, after almost 1000 years of foreign rule. This opportunity was actually the result of those Freedom Fighters who laid their precious lives to liberate India from foreign rule. Unfortunately, they did not live to witness the national tricolour being hoisted on 15th August 1947. The real heroes of our freedom struggle are the ones who contributed immensely during the 90 years, starting with 1857 through 1947. They were the real sons of the soil, most of whom martyred as nameless & faceless soldiers (Freedom Fighters). For example, Chauri Chaura incident, the centenary celebration of which was inaugurated by Shri Narendra Modi on 4th Feb 2021.

However, some of the bravest leaders that emerged from this 'unsung warrior' tribe of Freedom Fighters did not get due recognition, were either sidelined or even eliminated, as a political collateral damage, during the transition and post-independence Republic of India.

The most visible faces who worked closely with the British, negotiated and planned the transition to a free & independent India were actually the ‘politicians’ and not just freedom fighters. These are the people who would be at the forefront, guiding and directing the future course of Free India.

The reason we had to discuss this differentiation and categorise the two types of ‘Freedom Fighter’ here is to clearly define and fix responsibility of what we are going to discuss next. These politicians who led Independent India through the next decade (1947-1957) were the ones responsible for who we are today as a Nation.

Free India, under the guidance and leadership of these ‘freedom-fighter-turned-politicians’ (mostly Brown Sahibs) chose to follow Soviet Union model, then prevailing system of Socialism (read Stalin/ Leninist / Marxist ideology of Socialism) as a guiding philosophy to organise our Society, Polity and Economy. THIS was the sad beginning of the end of a centuries old wonderful civilisation of Bharat with a glorious past, that we refer as ‘Sone ki Chidiya’.

Sometimes, the review of a book is as brilliant as the book itself. In a very erudite review of the book '70 years of Secularism', Aravindan Neelakandan states:

"Stalin was perhaps the most notorious mass-murderer in human history. Yet Jawaharlal Nehru, who projected himself as the paragon of democracy, went into raptures in his eulogy of this mass murderer."

With massive intellectual, economical & political support of then Soviet Union, laced with the deadly & vicious combination of Marxist ideology, India started moving ahead as a ‘free & sovereign’ nation, supposedly! As we shall soon discover.

Very detailed account of KGB activities is documented, chronicled and shared by few members of KGB who defected from the organisation and moved to the West. Vasili Mitrokhin, the archivist of KGB and Yuro Bezmenov who operated in India during the sixties and seventies, to name a few.

Vasili Mitrokhin who defected from KGB and moved to UK, wrote two brilliant archival accounts of KGB, authored along with Christopher Andrew: Sword and the Shield (1999) and The World Was Going Our Way: The KGB and the Battle for the Third World (2005). Yuro Bezmenov also defected and spent years in India under disguise and anonymity, until he finally settled down in Canada. 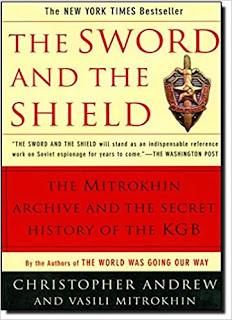 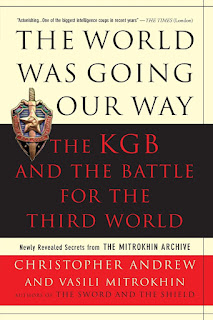 KGB intelligence operations & practices across the globe draw heavily from the Chinese military strategist Sun Tzu, The Art of War fame. Ideological Subversion was discussed in detail by Sun Tzu 2500 years back, as an alternative non-aggressive method of winning over enemies, without actually going through a conventional warfare. This became the KGB handbook for spreading their extreme leftist ideology globally.
This is where Ideological Subversion comes into the picture. To exactly understand how and what got us to this point as a nation, we need to delve deeper into this concept of ideological subversion.
Ideological subversion as practiced by KGB is a kind of psychological warfare - peaceful, overt, legitimate and clearly visible, that involves very slow and gradual control over the minds of target enemy (country, region, society, geography) by systemically brainwashing them. This process takes about 15-20 years and has very specific application areas, as follows:

During the 50s & 60s (Nehru Period), this activity was carried out in a very covert yet planned way, in collusion & consent of top leadership and cohort of corrupt politicians, bureaucrats, historians, educationists, socialites, media, films and television programmes. And this continued as a legacy right through the transition from Nehru to Indira Gandhi (60s & 70s) and then on to 80s during Rajiv Gandhi, as Prime Minister.

By the time Russia itself disintegrated during late 80s through early 90s, India project of Ideological Subversion was also completed. KGB operations in India that started during the Cold War period of 'bipolar global super-power structure' lost its relevance, and from here on, India project was on an autopilot mode, serving the long term objectives of Marxist ideology. Almost three generations were already impacted under the colonised education system of Marxist ideological Subversion project.

Today we have a well prepared, full blown Marxist cadre base, pushing and perpetuating the agenda of complete destruction of India. Either knowingly or under the blissful ignorance, they carry forward the legacy of Ideological Subversion to the next generation.

There are much more dangerous & sinister stages of this psychological warfare that follow Ideological Subversion, which we shall discuss in the next post.